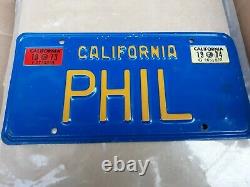 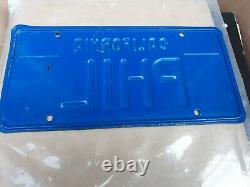 This is one of the most unique items out of this collection. The is the personalized "PHIL" California Blue and Gold License Plate that music producer Phil Spector personally owned and used on his car in the years 1973 and 1974. This was obviously the rear license plate which has both the 1973 and 1974 registration stickers on the back.
These California registration numbers are clearly visible and can be used by any interested party to confirm the originality of this unique California license plate. For those not familiar with the career of Phil Spector, an excerpt from Wikipedia is provided..
From Wikipedia, the free encyclopedia. December 26, 1939 The Bronx.

Harvey Phillip Spector (December 26, 1939 January 16, 2021) was an American record producer. Musician, and songwriter who is best known for his innovative recording practices and entrepreneurship. In the 1960s, followed decades later by his two trials and conviction for murder. Spector developed the Wall of Sound. A production style that he described as a Wagnerian. Approach to rock and roll. He is regarded as one of the most influential figures in pop music. And one of the most successful producers of the 1960s. Spector moved to Los Angeles. As a teenager and began his career in 1958 as a founding member of the Teddy Bears. For which he penned To Know Him Is to Love Him. In 1960, after working as an apprentice to Leiber and Stoller. And at the age of 21 became the youngest ever U. Label owner to that point. Dubbed the First Tycoon of Teen. Spector became considered the first auteur. Of the music industry for the unprecedented control he had over every phase of the recording process. He produced acts such as the Ronettes. And Ike & Tina Turner. And typically collaborated with arranger Jack Nitzsche. And a de facto house band. Later known as the Wrecking Crew. The above mentioned item was obtained from a historically important collection of records, acetates, test pressings, music and media memorabilia that originated from an individual that worked in the music and entertainment industries since the 1960s. This individual most importantly worked for the The Beatles' owned entertainment conglomerate known as Apple Corps LTD in the 1970s as well as being a highly placed employee at Phil Spector Productions. As I said, The former Philles Records employee who owned this item also worked with Phil Spector on a regular basis. I was told by this employee that Phil Spector frequently discarded record production materials, recording equipment and records once he no longer needed those items.

Please Check my other and future listings for more rare Philles and Apple Records records, acetates and awards. This acetate will come with a Letter of Authenticity signed by myself.

My name is Christopher Chatman and I have been writing and dealing in acetates and extremely rare music items since 1977. That article was published in the 1990 book "Goldmine's Rock N' Roll 45 rpm Record Price". Thank you to all the customers who have made the sale and distribution of this most unusual collection the growing experience it continues to be today. Please look at my other items to view other items from this important collection. The item "PHIL SPECTOR 1970S CALIFORNIA BLUE & GOLD VANITY PERSONALIZED PHIL LICENSE PLATE" is in sale since Thursday, August 26, 2021. This item is in the category "Collectibles\Transportation\Automobilia\License Plates\US\ California". The seller is "carnivalcollectibles" and is located in Running Springs, California. This item can be shipped worldwide.